Currently, Gallium Nitride (GaN) chargers rule the roost. In terms of size, GaN chargers are more compact than existing chargers. As a replacement for silicon, GaN can conduct voltages significantly higher than silicon over time. At the same time, less energy is lost to heat, and current is transferred more effectively as a result.

This means that GaN chargers with several ports in a compact form factor can be used to charge multiple devices simultaneously. The A19 65W GaN multi-function-HUB charging set from Acefast, on the other hand, features a brand-new concept from the company. A docking station for USB-C devices such as laptops, tablets, and smartphones rather than a charger. 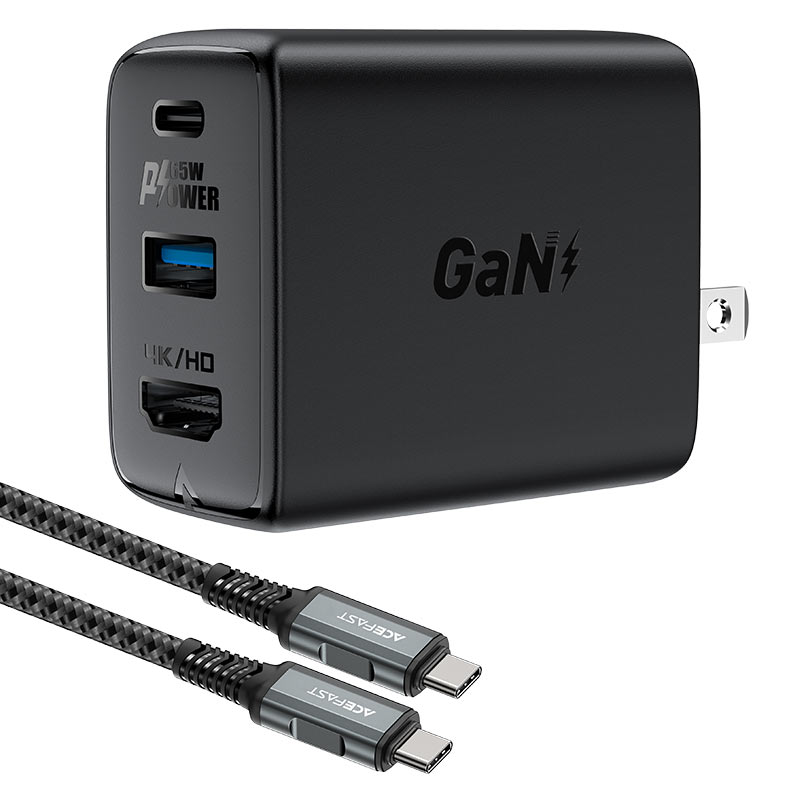 On the charger-HUB, there is a USB-C port, a USB-A port, and an HDMI port that may be used to stream media to the device.

A USB-C connector can charge your device up to 60W PD and provide up to 4K video and digital audio signals to the connected device, whether it’s a smartphone, tablet, or PC. With an HDMI connector attached, you can use an HD display, such as a monitor, HDTV, or projector, to expand the screen of your device.

When you have a spare USB 3.0-A port, you can utilize it to connect your USB peripherals, such as a keyboard or mouse. These USB devices can be powered by this port’s 5V/1A (5W) output, as can all other USB-A ports.

Since managing the visible connections used to be a hassle with this charger, I can now project a phone and a PC onto a large TV or monitor without using a separate docking station. Furthermore, because the charger-size HUBs are comparable to regular chargers, plugging them into the wall isn’t an issue.

PD3.0’s 60W fast charge protocol is one of the most cost-effective methods for charging various gadgets. Apart from PD3.0, the USB-C port is compatible with numerous charging protocols, such as Apple 2.4A, Samsung 5V-2A, Samsung AFC, QC4.0+/3.0/2.0, and PPS. All USB-C charging devices are covered by the broad range of compatibility. For example, a MacBook Pro 13-inch may be fully charged in under two hours using 60W power. 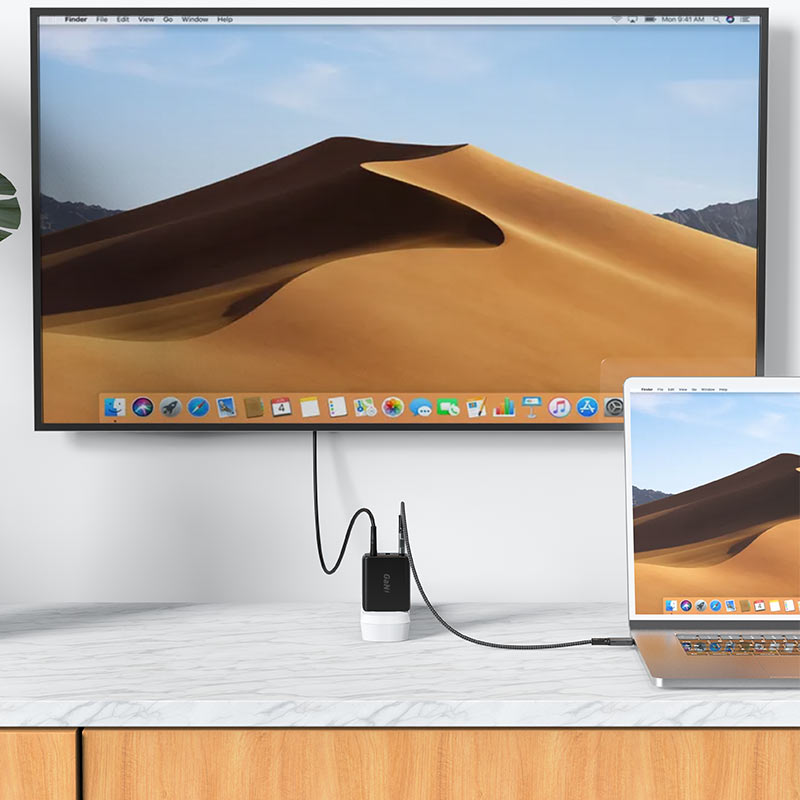 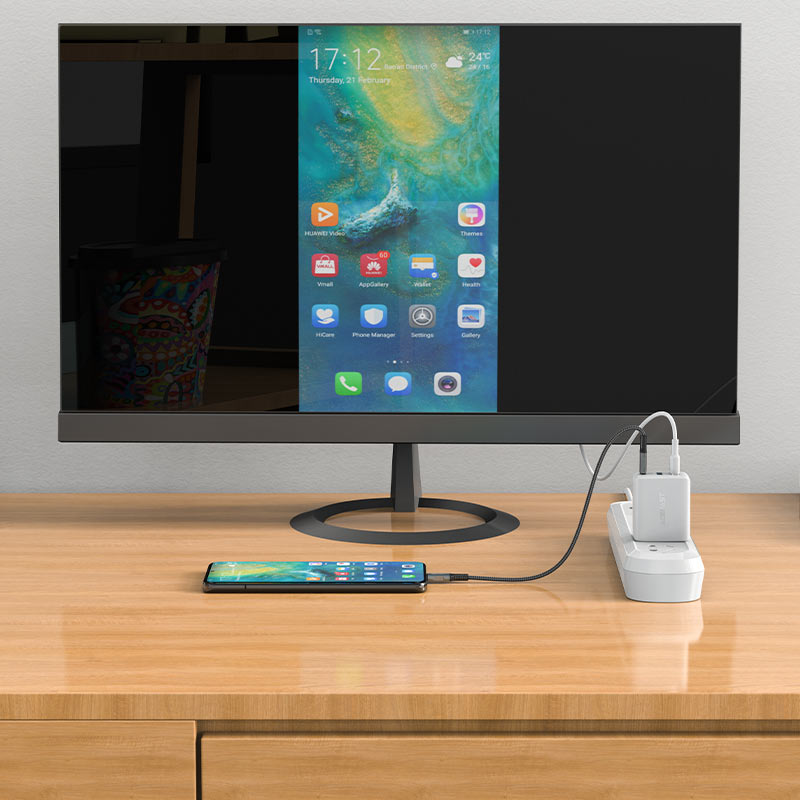 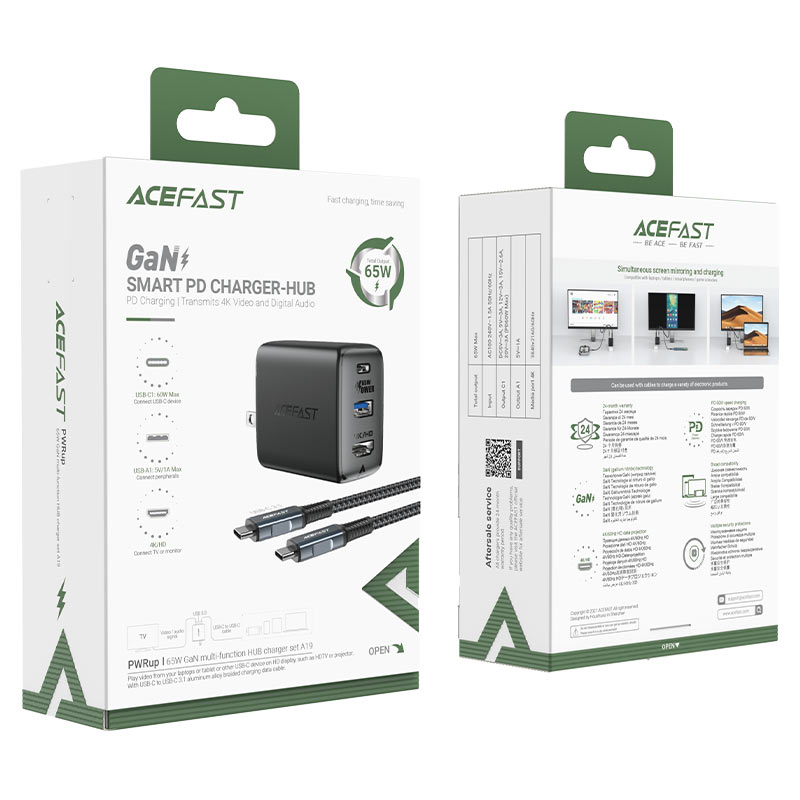 An aluminum alloy braided 6-foot USB-C to USB-C cable that supports PD 100W maximum charging is available. The cable can even offer higher power if you already have a 100W charger or higher. Only 65W of power efficiency can be achieved with the Acefast GaN charger-HUB.

Within an hour of using the charger-HUB, all of the current Android devices can be fully charged. For some older devices that don’t have fast-charging capabilities, the charging period could be extended to around two hours.

In real life, the charge-HUB is a great add-on for your laptop that lets you expand the screen while it is charging.

Additionally, it’s a great addition to the Switch’s accessories lineup. In addition to charging and video output, the one USB-C connector on the Switch is now capable of both. Even though the charger-HUB can transfer 4K signals, the Nintendo Switch only supports 1080P resolution.

As long as your device’s USB-C port supports 4K video output, the charger-HUB can also project 4K material with incredibly low latency. Additionally, the USB-A port’s architecture lends itself well to future extension. Using the charger-HUB, a gaming peripheral like a gamepad or mouse can be attached without using up any of the device’s interfaces.

From laptops to smartphones to power banks, the A19 65W charger-HUB can quickly charge practically all of your devices via a variety of protocols. The charger-HUB can also save you a lot of time if you want to use an external display or TV.

Nintendo 0
GADGETS VILLAGE
If you love gadgets, technology, and keeping up with the latest news, then our website is perfect for you. We cover all the latest gadgets and tech news, from CES to new iPhone releases. Plus, we have a comprehensive list of the best gadgets out there – so you can always stay ahead of the curve. Check us out today and join the conversation!
INFORMATION
About Us
Contact Us
Privacy Policy
Terms of Service
FOLLOW US
Google News
Facebook
Twitter